A forest path leading to a boulder commemorating Lt Couture, in the woods named after him.
Take exit 4 on the A11 to the D955. Take it NW to the D371.3. Follow the latter north through the town. Right before crossing over La Berthe and the lake, there is a dirt road leading into the woods. Follow it and you will find the monument.
On June 6th 1944 2nd Lt Couture participated in Operation Overlord in three 6h missions. The next day, his squadron of 16 planes flew on a mission to interdict German reinforcements heading for Normandy. South of Nogent le Rotrou, they spotted a column of vehicles and strafed them in three passes. On the third pass, 2nd Lt Couture's P-51 Mustang was hit. Shrapnel from Margon's flak battery hit the motor. However, Couture was not wounded until he crashed, opening up his forehead. A farmer took care of him and passed him over to the Resistance.

External link :
Fiche sur France-Crashes 39-45
Notified by : Arnaud Theron.   Record added 19/01/2009.
Photos : Arnaud Theron.
The photos are under copyright. They may not be reproduced, modified, distributed in any support without prior permission.
You are free to make links to this page. 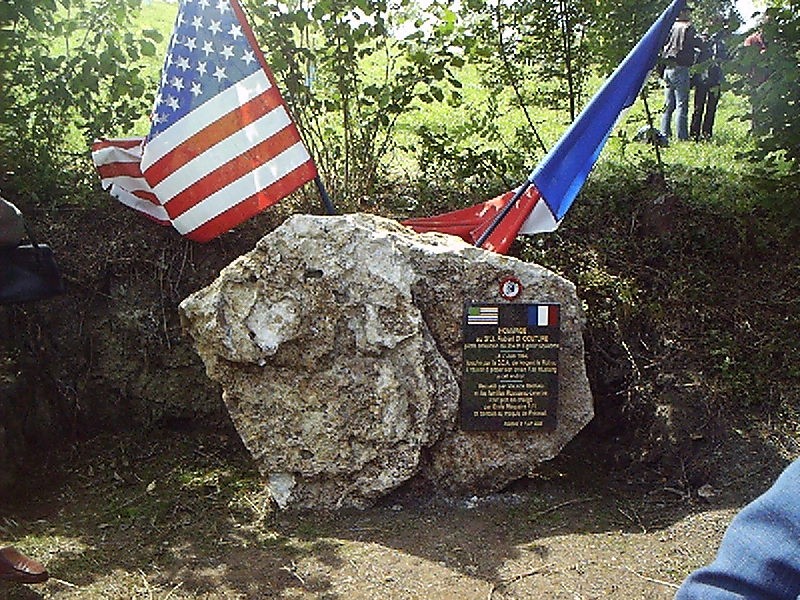