The small woods next to the Route d'Angevillers contains a memorial commemorating US aviators.
Route d'Angevillers , Beuvange-Sous-St Michel , 57-Moselle , Lorraine , France
Take the A31 N from Metz and get off at exit 43 onto the D14. At the first roundabout, go all the way around and head NW. Get off at the D152E heading SW and then immediately turn S onto the Route d'Angevillers. Head into the field on the E of the road and go into the woods. Follow the trail marked out and the monument will be on your right.
In memory of the B-17 crew that crashed here on September 8th 1944
Let us not forget these men, our liberators

On Friday September 8th 1944, an armada of 1070 bombers and 349 escort fighters took off from English soil. Their main objectives were the German industrial towns of Ludwigshafen, Karlsruhe, Gustavburg, and Kassel. The B-17G 42-31560 of the 510th BS 351st BG was part of this armada. However, the crew encountered mechanical troubles with their no.3 engine. They left the formation to drop their payload on a nearby target of opportunity. Following that, the no.2 and 4 engines died, causing the plane to lose altitude and drop out of the cloud cover. It was immediately hit by German flak fire. The bomber finally crashed in the woods of Beuvange-Sous-St Michel, killing three members of the crew: Sgt Edward JANCSAK, S/Sgt Dewey COOPER, and S/Sgt Wallace VAN WIRT. Five others were captured and only one, Sgt Donald Freeman, escaped with his life and freedom back to the UK thanks to the help of local Frenchmen. The same day two other American bombers ended their careers on Lorraine's soil: the B-17G Ā“Shady LadyĀ” of the 398th BG that landed near Ley, and the B-24 of the 466th BG that also landed in a field near the Vigy woods.

Footnote on the B-17 monument : the colors are incorrect. The plane that arrived in Polebrook in February 1944 was painted aluminium. Its markings were black. The red band was painted on the tail in March 1944. Therefore, according to Sgt Hagans, the plane was never graced with this red band. Hagans is the only living survivor, who I had the pleasure to meet in Lorraine in May 2006.

Notified by : Michel AUBURTIN du CDRH de Nancy-Ochey.   Record added 30/06/2010.
Photos : Michel AUBURTIN.
The photos are under copyright. They may not be reproduced, modified, distributed in any support without prior permission.
You are free to make links to this page. 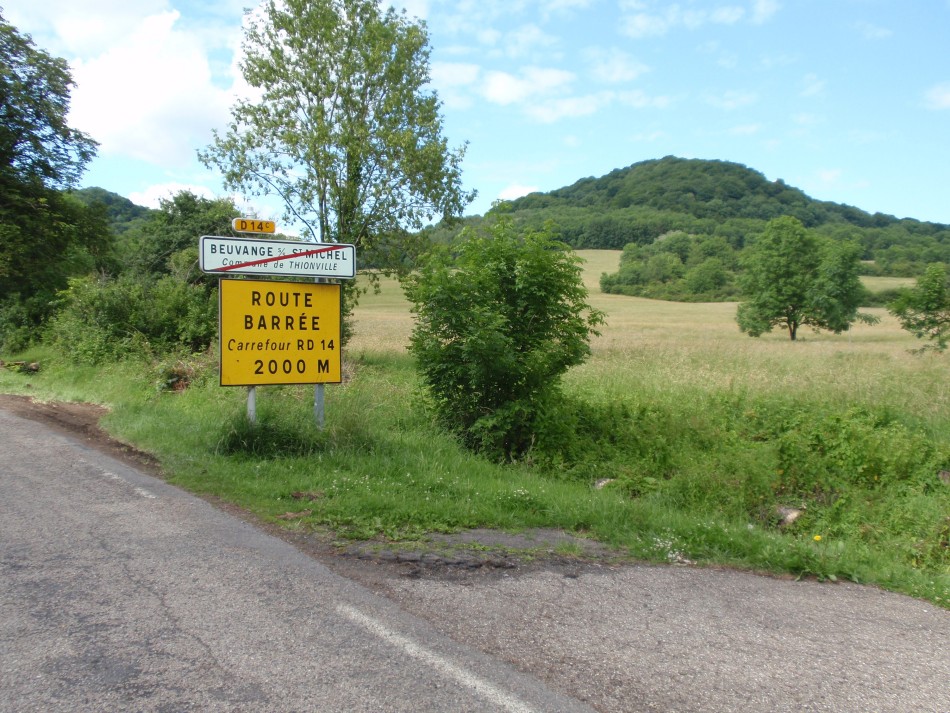 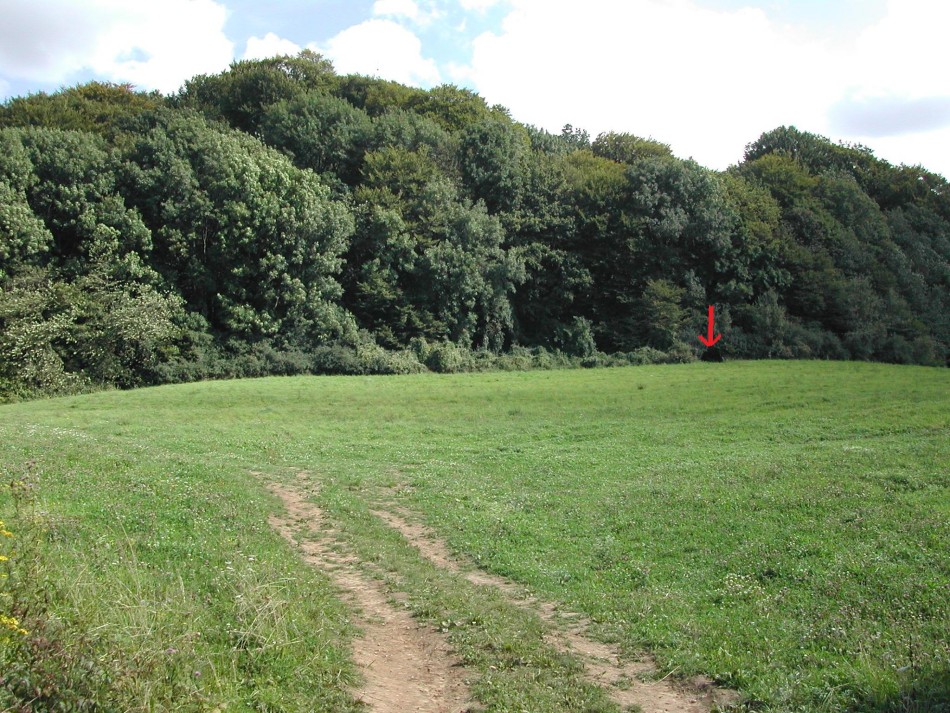 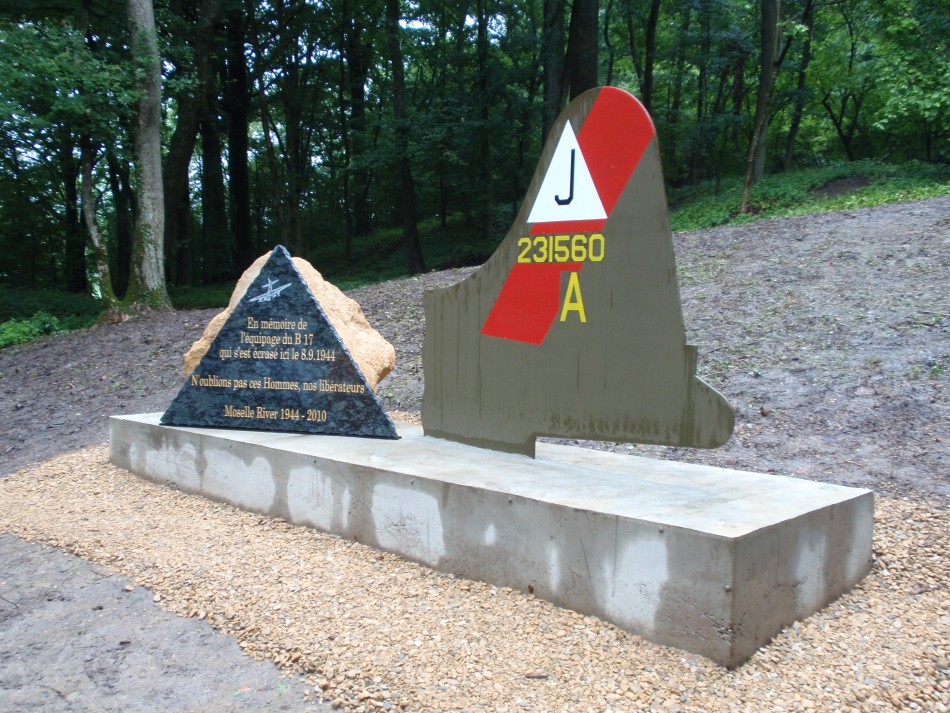 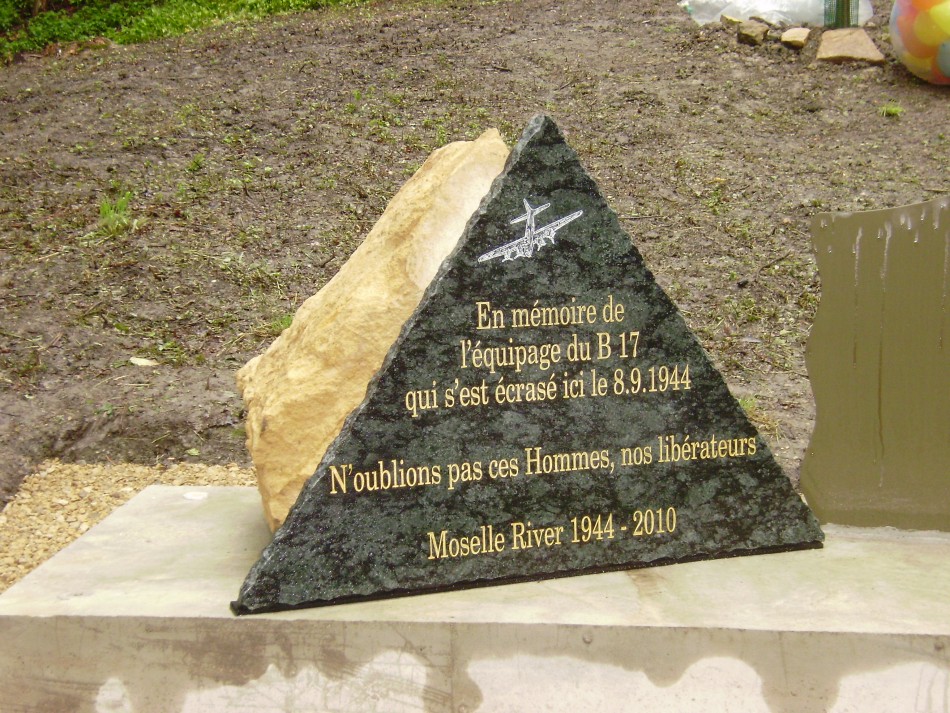