A resident of Norton Bridge in Staffordshire was so impressed by the Air Race that he had a plaque made. The plaque remained fixed to the house until it was eventually demolished. The current wherabouts of the paque are unknown.

Acknowledgements to the Past Track web site and John Godwin as donor.

Notified by : Pierre P├®castaingts.   Record added 04/02/2011.
Photos : Site Past Track.
The photos are under copyright. They may not be reproduced, modified, distributed in any support without prior permission.
You are free to make links to this page. 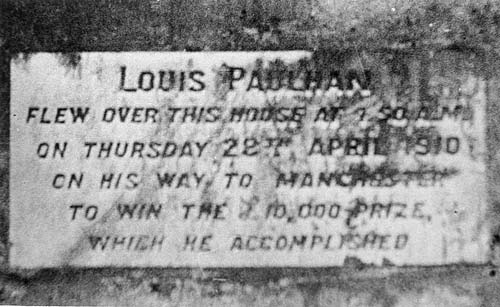